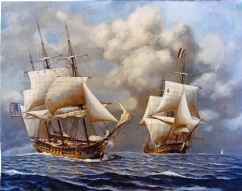 The Quasi-War (French: Quasi-guerre) was an undeclared war fought almost entirely at sea between the United States and France from 1798 to 1800, which broke out during the beginning of John Adam's presidency. After the French Monarchy was abolished in September 1792, the United States refused to keep repaying its large obligation to France, which had supported the U.S. during its own War for Independence. The U.S. claimed that the money had been owed to a previous regime. France was also outraged over the Jay Treaty and that the United States was actively trading with Britain, with whom France was at war. In response, France authorized privateers to conduct attacks on American ships, seizing numerous merchant ships and ultimately leading the U.S. to retaliate.

The war was called "quasi" because it was undeclared. It involved two years of hostilities at sea, in which both navies and privateers attacked the other's vessels in the West Indies. Many of the battles involved famous naval officers such as Stephen Decauter, Silas Talbot and William Bainbridge. The unexpected fighting ability of the newly re-established U.S. Navy, which concentrated on attacking the French West Indian privateers, together with the growing weaknesses and final overthrow of the ruling French Directory, led the French foreign minister, Talleyrand, to reopen negotiations with the U.S. At the same time, Adams feuded with Alexander Hamilton over control of the Adams administration. Adams took sudden and unexpected action, rejecting the anti-French hawks in his own party and offering peace to France. In 1800 he sent William Vans Murray to France to negotiate peace; the Federalists cried betrayal. Hostilities ended with the signing of the Convention of 1800

The naval engagements of the Quasi-War primarily consisted of single-ship actions off the coast of the United States and in the Caribbean. At the beginning of the conflict, the U.S. Navy operated with a battle fleet of about 25 vessels, which patrolled the southern coast of the United States and throughout the Caribbean hunting down French privateers. French privateers generally resisted, as did La Croyable, which was captured on 7 July 1798, by Delaware outside Egg Harbor, New Jersey On 20 November, a pair of French frigates, Insurgente and Volontaire , captured the schooner USS Retaliation, commanded by Lieutenant William Bainbridge; Retaliation would be recaptured on 28 June 1799.

On 9 February 1799, the frigate Constellation captured the French Navy's frigate L'Insurgente and severely damaged the frigate La Vengence, largely due to Captain Thomas Truxtun's focus on crew training. By 1 July, under the command of Stephen Decatur, USS United States had been refitted and repaired and embarked on its mission to patrol the South Atlantic coast and West Indies in search of French ships which were preying on American merchant vessels.

On 1 January 1800, a convoy of American merchant ships and their escort, United States naval schooner USS Experiment, engaged a squadron of armed barges manned by French-allied Haitians known as picaroons off the coast of present-day Haiti. On 1 February, the American frigate USS Constellation unsuccessfully tried to capture the French frigate LaVEngence off the coast of Saint Kitts. In early May, Captain Silas Talbot organized a naval expedition to Puerto Plata on the island of Hispaniola in order to harass French vessels. The Talbot's expedition captured the Spanish coastal fort at Puerto Plaza and a French corvette. Following the French invasion of Curacao in July, the American sloops USS Patapsco and the USS Merrimack  began a blockade of the island in September that led to a French withdrawal. On 12 October, the frigate Boston captured the corvette Le Berceau On 25 October, the USS Enterprise defeated the French brig Flambeau near the island of Dominica in the Caribbean Sea. Enterprise also captured eight privateers and freed eleven U.S. merchant ships from captivity, while Experiment captured the French privateers Deux Amis and Diane and liberated numerous American merchant ships.

American naval losses may have been light, but the French had successfully seized many American merchant ships by the war's end in 1800 – more than 2,000, according to one source

Menu
HOME
ABOUT US
RESOURCES
GALLERY
NEWS
CONTACT US